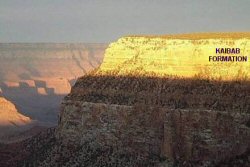 The Kaibab Formation was named after the flat Kaibab Plateau. Kaibab is a Southern Paiute Indian word meaning “mountain lying down.” The formation is composed of sedimentary rocks: limestone, dolomite, sandstone, and chert, formed under a shallow inland sea. Other Grand Canyon layers were terrestrial, but all were deposited on a flat landscape either near or beneath sea level. Much later, geological processes raised the Grand Canyon area to its present altitude, averaging 7000 feet at the South Rim and 8200 feet on the North Rim.

Limestone and dolomite are composed mostly of the shells of sea creatures such as clams and snails. A few of these may be preserved as fossils, but most shells become crushed or dissolved and are no longer recognizable.

The Kaibab Formation is sandy because at maximum the sandy beach was only about 50 miles east of Grand Canyon. In fact, toward the east the Kaibab is mostly sandstone. 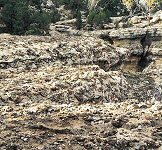 Chert is a major constituent of the Kaibab Formation. It is a hard, brittle rock made of silica that forms as lumps or “nodules” within limestone beds under the sea. Chert is the chief tool and arrowhead material of ancient people world wide. The brown lumps of chert in the Kaibab are mostly made from the silica skeletons of ancient sponges called Actinocoelia.

Chert is very hard, so the sturdy Kaibab Formation resists erosion. Thus, in a sense the lowly sponge protects the Grand Canyon. This is a photo of Actinocoelia.

Our Tribe in Kaibab Time

Here at the future Grand Canyon, the shoreline is in the east and we are diving in 100 feet of sea water. There are sharks and bony fish in the water, shellfish and seaweed on the bottom. Everything has that salty-slimy smell. The sea floor is also thick with sponges: we collect them for trade in Pangaea, our world continent. From our human perspective the sea will be here forever. We have always lived like this.