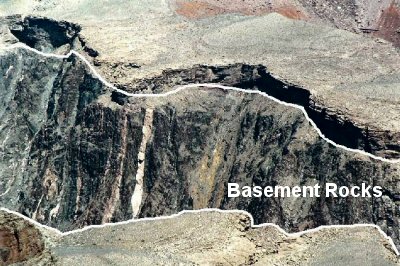 The rocks at the bottom of the Canyon are the roots of a major mountain range. Grain by grain, creek by creek, landslide by landslide, the mountains eroded down until at last the land was at sea level. These are among the basement rocks of Arizona--the oldest rocks, upon which all other rocks are deposited. Prior to this time, Arizona and much of the Southwest did not exist.

For many years, this Inner Gorge complex of rocks has been known as the Vishnu Schist, and popular literature still calls it that.

The Vishnu Complex is schist, gneiss, and granite. The Vishnu mountains resulted from plate tectonic collision of ocean floor sediments and basalts with the North American continent. Under great pressure and heat, sedimentary and igneous rocks metamorphosed to form the black and silver mica schists of the Vishnu. White or pink granite plutons, dikes, and sills intruded the schist. After metamorphism, some granites became gneiss, a rock that looks like granite with wavy layering.

Here is a closer view of the Vishnu Schist, from the Clear Creek Trail.


The following story pretends that people were alive when this formation was laid down. But it was long before people. The purpose is to immerse ourselves in the time period--to imagine being there.

Our Tribe in Vishnu Time

We live on the slopes of a mighty mountain range. At sunrise our peaks glow pastel pink. No living thing except us has seen these mountains--eyes will not evolve for another 1,200 million years. Yet we are quite certain, in our tiny time frame, that these mountains are everlasting. How could such great things ever disappear--ever erode to the sea?