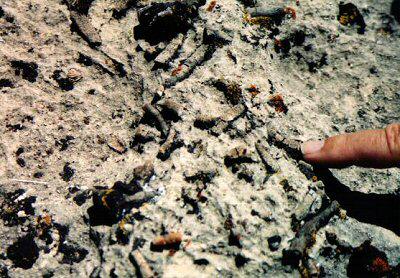 Fossils are the remains or traces of ancient life. Some scientists say it must be over 10,000 years old. Even ancient tracks, trails, and burrows are fossils. Sometimes original material is preserved: shells, wood, or bones. More often, the original material is petrified by soaking in mineral-laden groundwater. Molecule by molecule, the remains are mineralized. Mineralization can preserve even the minute structures of an organism, but usually the soft tissue is lost.

Many sea animals have hard shells that readily fossilize. Such fossils are often encased in solid stone that was once the mud of an ancient sea bed. In most instances, as the stone erodes away, so does the fossil.

However, when a fossil is preserved by chert, a durable rock made of silica, the enclosing limestone can wear away, leaving the fossil protruding from the rock. In the Kaibab Formation, fossils are often preserved in chert and exposed by this differential erosion. Differential erosion is especially prominent at this site in the form of chert nodules--brown protruding spheres and tubes.