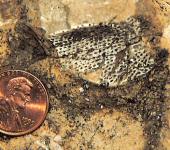 At the fossil site, don’t be fooled by the molds of brachiopods, which have little holes where spines once emerged, making them look like bryozoans.