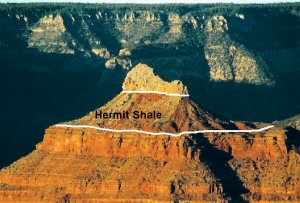 The Hermit Formation redbeds provide much of the red color that paints Grand Canyon. The red color is from iron oxide—these rocks are rusty! Though it is often called the Hermit Shale, most of the Hermit is not shale but siltstone or mudstone mixed with fine grained sandstone. All these are soft, fine grained sedimentary rocks, weathering to form gentle slopes--as in this photo of Isis Temple (with Coconino Sandstone at the top).

The Hermit Formation forms a red slope below the Coconino Sandstone cliff. Animal tracks, mud cracks and raindrop imprints prove that the Hermit was often exposed to air. At other times, floods brought in siltstone and limestone pebbles. Hermit Formation fossils include invertebrate tracks and trails, insect impressions including a large dragonfly, and many types of worm burrows. There are also plant fossils in abundance, especially ferns and conifers. All these fossils and sediments paint a picture of a semi-arid lowland where meandering rivers ran between forested banks.

The very top of the Hermit contains narrow desiccation mudcracks up to 20 feet deep. If these cracks had been openly exposed to rain and weather, they would have filled with mud, but they are filled with Coconino Sandstone. This shows the cracks opened after the Coconino sands blew over the Hermit muds. Under the dry sands, the cracks in the Hermit Formation widened and admitted the sifting sand.

Our Tribe in Hermit Time

The hills to the east shed this red mud. We have a path to the river. Green ferns line the path, which is accented with pine and horsetail and buzzes with blue and orange dragonflies. Sometimes after a flood this river changes its course, as it has always done. We re-locate to higher ground, build new houses, raise our restless children. Cracking scrolls tell us we have lived this way for ten thousand years.

Today, we have the perspective of all this being 285 million years ago; we know 10,000 years is nothing.