Grand Canyon rocks are mostly sedimentary, and sedimentary rocks form layers or “strata,” one above the other. The study of layered rocks is called stratigraphy.

Sedimentary strata are usually deposited in horizontal beds. The oldest layers are at the bottom; youngest at top. No cross sections of strata can be seen unless erosion or faulting (or a highway road cut!) reveals the “insides” of the layer. Grand Canyon is a famous place to see just that--each layer's cross section.

Each rock layer, or formation, has a name, often taken from a local geographic feature. For example, the Bright Angel Shale is named after the Bright Angel Creek in central Grand Canyon. Sometimes related formations are combined into a group such as the Supai Group.

All Grand Canyon sedimentary layers formed near sea level as most of Arizona sank, or "subsided." Modern examples of subsidence include Venice, New Orleans (Mississippi Delta), and most of the Netherlands. 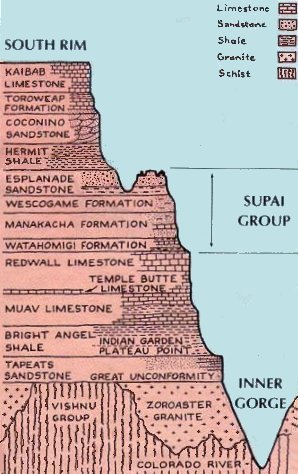 The Grand Canyon’s sedimentary layers are expressed as alternating cliffs and slopes. This gives the Canyon its stair-step appearance. The slopes are made of soft and easily eroded rocks: shale, mudstone and weakly cemented sandstone or siltstone. Cliffs are the more durable rocks, usually well cemented sandstone and limestone. Igneous and metamorphic rocks of the Inner Gorge are made of extremely hard rocks. They are easily hard enough to form cliffs, but their contorted structure and the easy splitting of schist often causes these rocks to break into steep rugged slopes as well as cliffs.

All the Grand Canyon sedimentary layers formed near sea level (just above or just below). Any subsidence of the land would cause the sea to come in, or "transgress." This happened many times. In addition, any significant deepening of the sea would cause transgression. For example, during periods of global warming, the polar ice could melt. This would deepen the sea. Each time the sea rose or the land sank, the sea encroached and sediments accumulated, creating various marine rock layers.

On the other hand, each time the sea level lowered or the land rose, the land became dry again. This is called a regression of the sea. Regressions cause erosion of the uplifted, exposed landscape. In some cases, following regression, rivers brought sediment down from higher regions, making terrestrial sediment layers. Other times the wind brought desert sands. The final result is the Grand Canyon as we see it--many layers, some marine and some terrestrial.