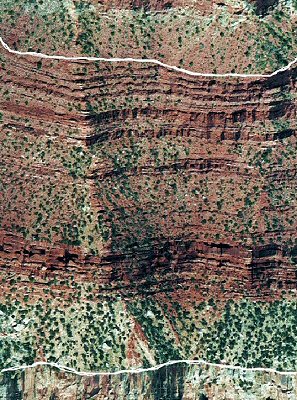 The Supai Group forms the red stairsteps below the Hermit Shale slopes and above the high red cliffs of the Redwall Limestone. The group comprises four formations composed of rust red sandstones, siltstones, shales and a few limestone beds containing a beautiful red chert called jasper. The Supai Group represents a wide variety of environments, but recent study shows the most prevalent is coastal desert eolian (wind-blown) sands. Each formation was covered by the sea at least once, but most of the formation represents dry land. As in the Hermit, the red color is from iron oxide. 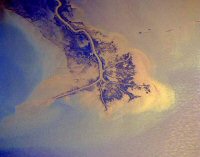 Now picture the vast delta of the Mississippi River where the sediments of a continent currently accumulate on the gently sinking edge of the Gulf of Mexico. This is analogous to part of the varied landscape of the Supai, formed beside interior basins at the western edge of the world supercontinent, Pangaea.

The time boundary between the Permian and Pennsylvanian Periods occurs in the Supai Group just beneath the Esplanade Sandstone (see Geologic Time Chart --return with your back button). The Esplanade is Permian; the Wescogame, Manacacha and Watahomigi are Pennsylvanian.

Our Tribe in Supai Time

Our roads are waterways, our cars canoes, and our houses are on stilts. The fish market is all a-bustle with coastal venders of everything an estuary provides. There is shark kabob, sushi, every manner of fish, and paleo-jambalaya. Everyone is immigrating; the world is rich. But I never seem to have enough time.