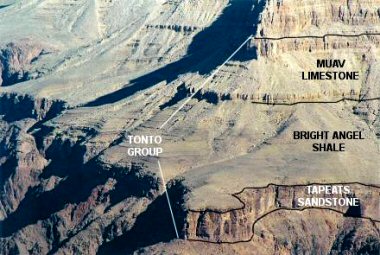 As any sea transgresses over the land, it spreads a blanket of varied sediments. The sediments derive from rivers that carry their loads to the advancing edge of the sea. The rivers' heaviest particles, stones and sand, come to rest near the beach, later forming conglomerate and sandstone (called a "facies" of this sea). Lighter particles, silt and clay, settle farther out, eventually hardening to shale (another facies). Even farther from shore, organic lime muds precipitate from sea water, forming limestone, the third facies of this single sea bottom.

The Tonto Group consists of all three of these facies: Muav Limestone on top, Bright Angel Shale between, and Tapeats Sandstone (containing a "basal conglomerate") at the bottom. If these facies formed side by side as described above, how did they come to overlie each other?

As you butter a slice of toast from left to right, the butter on the left side of the toast was "deposited" earlier. In the case of toast, this amounts to seconds; in geologic processes it can take millions of years. As a result, a formation is not of the same age in all places. The Tonto Group rocks are all older to the west, showing that these deposits were spread from west to east.

Now imagine that three people are assembling a six-foot sub sandwich in the local sandwich shop. The mayonaise guy starts off on the left (Tapeats Sandstone)--imagine him spreading the mayonaise as he moves to the right along the sandwich. Right behind him comes the mustard guy (Bright Angel Shale) and following the mustard comes the oil-and-vinegar guy bringing up the rear (Muav Limestone). Soon all three are spreading their condiments simultaneously. All the condiments are "older" on the left. But they are now horizontally deposited, one atop the other, just like the Tonto Group layers!

Our tribe in Tonto time

Always at high tide we lug our fine-mesh nets down the trail to the beach, here at the future Grand Canyon. Now it is night and the moon is full--we see the glimmering rock that looks like an old man poking up through the sand. We cast our nets for trilobites and gather seaweed. There is no life on the land except for us and a few primitive mosses. At low tide the sea retreats impossibly far--over 2 miles. It is the moon that causes these tides, a moon so much closer to Earth than it will be in the far future. But now we don't know this. Fifty thousand human generations from now (a million years) our world will look about the same as now.