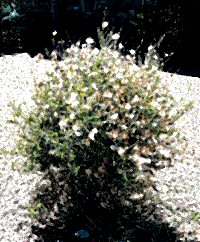 Apache plume is less common on the South Rim than cliffrose. The leaves and bark are very similar to cliffrose, but the 5-petaled flowers of Apache plume are larger, up to 2 inches, and pure white. The plant is much smaller than cliffrose and has a shrubby appearance, growing to 6 feet but usually 3 or 4 feet. Native Americans used a brew of Apache plume to prevent hair loss. The stems were sometimes used for arrow shafts. 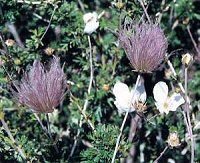 Apache plume's seed tufts are white to pink and profuse, fuller than those of cliffrose, with up to 40 winged seeds per flower compared to 5 or 10 for cliffrose. The plumes feel soft. Gorgeous flowers and seed tufts make this a perfect ornamental plant. Some nice examples, including these photos, grow in Tusayan village south of the park entrance, in front of the Wendy's restaurant. At the Canyon rim, Apache plume grows near Mather Point, Bright Angel trailhead, and along the turnout roads to Moran and Lipan Points.