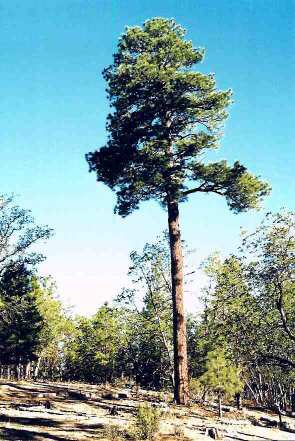 Grand Canyon Ponderosa Pine, one of five species, is the only long-needled pine here. Needles are usually five to nine inches and come in bundles of three. The tree attains a height of about 110 feet here, but at least 160 feet in the more moist mountains of California.

John Muir (1838-1914), the great naturalist who is sometimes called the "father of our national parks," measured a ponderosa in the Sierra Nevada that was 220 feet tall and 8 feet in trunk diameter. The current champion, in Oregon, is over 268 feet tall. Two to four feet in diameter is common for the large ponderosas here at the South Rim. Cones are three to six inches. An exceptional ponderosa may attain an age of 600 years.

Young ponderosas have rough black bark. Mature trees, after about 100 years, have thick orange-brown bark that protects the tree from mild wildfire. In addition, mature trees drop their lower branches in a process called self pruning. This prevents brush fires from climbing to the crown. Such adaptations are useless in extreme fire conditions such as those that have prevailed recently in many western states. Fortunately, so far, the Grand Canyon's South Rim has been spared.

Ponderosa cones contain winged seeds that are too small for people but just right for the South Rim's Abert Squirrel and many bird species. While the Pinyon Jay prefers the larger pinyon nuts, the author has seen a large flock of these devouring ponderosa nuts.

Mature ponderosa bark occurs in furrowed plates. These loose plates can pop off the trunk during a mild wildfire, removing the flames from the tree. Look closely and you will see little puzzle pieces. It's fun to imagine animal shapes in the pieces.

Ponderosa pine bark smells like vanilla and is used in the production of artificial vanilla.