Pinyon Pine is the only short needle pine that grows in the Kaibab Forest of the South Rim. Both Douglas fir and white fir also have short needles but they grow only below the South Rim on shady north-facing cliffs. Pinyon needles are about 1.5 inches long. The tree averages 20 to 30 feet tall.

The bark is rough; it is gray or black in color and occasionally covered with lichens. The trunk is crooked and branching, not straight like the ponderosa and firs. Cones are small and stubby, about 2 to 3 inches. The seeds, called pinyon nuts or pine nuts, are kidney bean sized and delicious. A bumper crop of pinyon nuts can be expected about every 4 to 8 years. 2004 and 2012 were bumper crop years. The pinyon reaches 400 years in age.

For thousands of years, the pinyon has enjoyed a symbiotic relationship with the pinyon jay. The jay collects pinyon nuts and buries them for the winter. Although the jay has a marvelous memory for its up to 1,000 caches, any nuts that are not recovered may grow into new trees.

Pinyon cones are often empty of seeds by the time they ripen; the nuts are a favorite of many forest animals and birds. Pinyon nuts are astonishingly rich, over 3,000 calories per pound (mostly in fat). Pinus edulis nuts are 14% protein, the most of any nut, but they contain no cholesterol. They contain all the amino acids needed by humans, including all nine of the essential amino acids that are not produced in the body. The nuts, roasted or raw, were a staple of prehistoric Indians (Ancestral Puebloans or "Anasazi") and also of historic tribes. People still enjoy them in foods and they are an essencial ingredient of pesto sauces. The seeds are expensive to buy, but pine nuts may be legally collected in national forests for personal use. Beware of sticky sap on the cones. 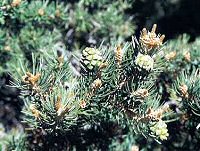 Here are some green pinyon cones that still have their seeds inside. The seeds take up to 18 months to mature in the cones.

Pinyon sap often oozes out of the trunk and hardens. Remarkably, this hardened sap can be chewed like gum, if you can doggedly chew past the first extremely unpleasant, crunchy 60 seconds while the expectorant sap polymerizes.